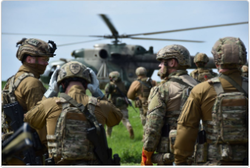 The Foreign and Expatriates Ministry has condemned the US decision to dispatch more military forces towards Russian borders, according to SANA.
Syria Condemns Washington and NATO Dispatching Troops Towards Russian Border

Apr. 19 - Syria condemned the US and NATO step of dispatching more military forces towards Russian borders posing a threat to international peace and security.
An official source at the Foreign and Expatriates Ministry told SANA on Sunday that the US step of escalation comes as a reflection of the US’s blatant intervention in the affairs of other countries, in addition to imposing coercive measures on them in an attempt to subjugate these countries to US policies and continue its hegemony on the world.

The source added that the Syrian Arab Republic rejects the US’s international relations methods, and expresses its full solidarity with friendly Russia and all measures taken to preserve its national security and protect peace and stability in the world in light of the threats that surround it as a result of the US reckless policies.     source from
Moscow sees U.S. influence behind Czech expulsion of Russian diplomats

Czech Prime Minister Andrej Babis said Saturday that the country was expelling 18 staffers from the Russian embassy in Prague for the alleged involvement of the Russian special services in two ammunition depot explosions in 2014.
The Russian Foreign Ministry criticized Prague for using "unfounded and far-fetched pretexts" in order to continue its anti-
Russian tirade in recent years.

"We express our strong protest to the Czech authorities. We will take retaliatory measures that will make the masterminds of this provocation realize their full responsibility for destroying the foundations of normal development of bilateral relations," the statement read.

The Russian Foreign Ministry on Friday announced a series of retaliatory measures, including entry bans and the expulsion of diplomats, in response to recent "hostile actions" by the United States.
Russia will ask 10 U.S. diplomats to leave the country, the ministry said.     source from 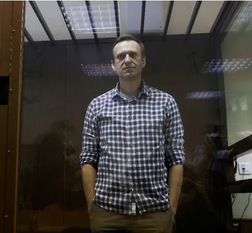 Jailed opposition leader Navalny, President Vladimir Putin's most prominent opponent, was arrested in January upon returning to Russia after recovering from a near-fatal poisoning attack he says was orchestrated by Moscow.

"In terms of the specific measures we would undertake, we are looking at a variety of different costs that we would impose, and I'm not going to telegraph that publicly at this point," Sullivan told CNN.

"But we have communicated that there will be consequences if Mr. Navalny dies." The 44-year-old Russian began a hunger strike on March 31 to demand proper medical treatment for back pain and numbness in his legs and hands.

"Our patient can die any minute," cardiologist Yaroslav Ashikhmin said, pointing to Navalny's high potassium levels and saying he should be moved to intensive care.

Both France and Germany on Sunday joined a growing international chorus of protest at Navalny's treatment.
Sullivan said the White House had told the Kremlin that Moscow would be "held accountable by the international community" for what happens to Navalny while in Russian custody.

US President Joe Biden said Saturday that Navalny's situation was "totally unfair," but he is facing criticism for not bringing up the dissident's treatment in a phone call to Putin last week or being more forthright in his public comments.

Sullivan said the White House had already made its position clear to Russia directly and that "the best way to deal with this issue is privately, and through diplomatic channels direct to the uppermost levels of the Russian government."     source from
美加大对俄制裁驱逐外交官 俄称坚决回击“侵略”行为！ 20210416 |《今日关注》CCTV中文国际
Apr 17, 2021
Symbolic Retaliation: Why the US Likely Would Attack a Kremlin Client State in Response to a Russian-Ukrainian War

Apr. 19 - Growing tensions between Russia and Ukraine are producing an surge of bluster from the Biden administration, as well as from the hawkish denizens of Washington’s think tanks. The administration keeps assuring Ukraine’s government that the United States and NATO have Kiev’s back in its confrontation with Russian-supported separatists in the eastern Donbas region as well as with Russia itself. An April 2 White House press release confirmed that in a telephone call to Ukrainian President Volodymyr Zelensky, Biden "affirmed the United States’ unwavering support for Ukraine’s sovereignty and territorial integrity in the face of Russia’s ongoing aggression in the Donbas and Crimea." Other high-level administration officials, including Secretary of Defense Lloyd Austin and Secretary of State Antony Blinken have done the same...

...A regime-change war against Venezuela is precisely the kind of tit-for-tat response chastened, but still angry and aggressive, US foreign policy mandarins might choose to salvage some prestige if Russia calls Washington’s bluff about defending Ukraine. There is, of course, a much easier way for America’s armchair hawks and laptop bombardiers to avoid the danger of such humiliation. But that approach would require them to end their posturing and saber-rattling toward Moscow, and they don’t seem inclined to embrace such basic prudence.    quoted from

Continue to Next Page